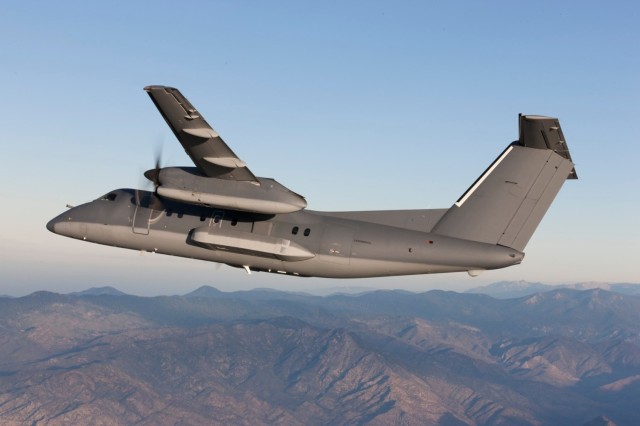 Since the program transitioned to the Army in 2012, PD SAI has worked with the user community and partner program offices to maintain and build upon the extremely successful performance of the Saturn Arch hyperspectral and GEOINT sensor capabilities. Under the Army’s management, the program proved to be one of the most highly sought-after assets in CENTCOM.

“The Saturn Arch QRC program was so successful that the Army funded it to build up to a fleet of 10 total aircraft over the past 10 years,” said Michael Payne, Product Manager Medium Altitude Reconnaissance and Surveillance System. “Additionally, the Army successfully enhanced the sensors and architecture of the system to enable remote processing, exploitation, and dissemination capabilities of the hyperspectral and GEOINT data collected on the platform allowing personnel on the ground to perform near real-time data analysis enabling intelligence products being more rapidly provided to the warfighter.”

As the drawdown in CENTCOM occurred, the Saturn Arch sensors and aircraft were slowly retrograded from theater. With the Army’s change in focus to Multi-Domain Operation requirements, PD SAI is working with the U.S. Army Combat Capabilities Development Command and development lab partner communities to transition the sensor capabilities to other efforts.