R2TD: A new tool for an ever-present threat 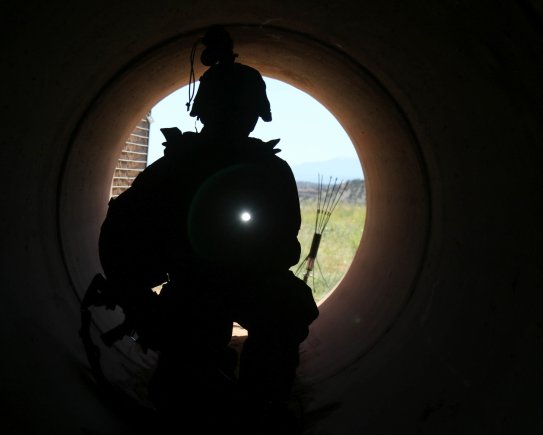 27 Oct R2TD: A new tool for an ever-present threat

Posted at 14:43h in News by Brian Cooper

War is as old as human history. This means a lot of the reactive tactics and protective equipment must evolve in response to an attack becoming strong. As weapons became heavier and deadlier-swords went from bronze, to iron, to alloys of greater hardness and durability-the defense for them would evolve, protective clothing going from very thick fabrics, to leathers, to metals to the hard ceramics and Kevlar we know today.

Terrain use has evolved over time, too. As the stakes continue to rise and objectives evolve, merely taking hills, fields and transportation routes was always the start, but taking, holding and occupying towns and cities for longer periods of time will be key.

This means tunnels. Cities thousands of years old, such as Paris and its 200 miles of tunnels and catacombs, or modern American cities like New York, which has 665 miles of subway tunnels, will make tunnels a consideration of modern urban warfare. Newer cities may not have subways as an afterthought, but as a foundation of their planning. In India and China, for example, subway stations are the root of creating new cities as the population continues to grow.

Tunnels have been used to thwart invaders and penetrate fortifications since there were invaders and fortifications. For example, ancient Romans used tunnels-called qanats-to transport water to sustain their cities. Were any enemy able to find those tunnels, they could do incredible damage to the city of Rome.

After all, to fight in tunnels, you have to find them first.

Dr. Steven Sloan, a research geophysicist with the U.S. Army Engineer Research and Development Center, has been working with his team on R2TD system for more than half a decade, which is less a piece of equipment than a suite of tools.

“What we’ve found over the years is that there’s no silver bullet that works in all geologies and all situations,” said Sloan. “So, we have multiple, different systems that each have their strengths in different things dependent on the setting that we’re working in, or what the target set is, then we can kind of mix and match to optimize detection.”

“The other two systems are actual in-ground permanently or semi-permanently installed, like an underground fence of sensors,” said Sloan. These other two systems are the border tunneling activity detection system-linear and the active seismic imaging system, which can counter adversaries using purpose-built tunnels or existing subsurface infrastructure, and assist in the survey of large areas for perimeter defense and the detection of existing tunnels and other subsurface anomalies, respectively.

“The thing with tunnels is they’re a low-tech counter to a high-tech adversary,” said Sloan. “So all it takes is his time and manpower to build one and there’s not a whole lot out there to stop them. It’s been around centuries and centuries for a lot of different conflicts.”

Sloan and his team know this, and thus they are often upgrading and tweaking the system.

“We’re upgrading the active seismic units that are in theater,” said Sloan. “We bring them back one at a time and we put in new hardware and new software that’s been developed over the last four or five years in there and then put them back over into their respective theaters of operations.”

“If someone was trying the tunnel under a facility to place explosives or something like that, you don’t want to be on the back end of that trying to figure out how it happened after it’s happened,” said Sloan. “It’s more of a preventative measure, or proactive rather than reactive. You won’t use this over every square inch of every facility that you would build. However, if you got some particularly vulnerable facilities in an area or something, some kind of secured facility that you really want to monitor, it’s another tool that you can use.”

Recently In The News