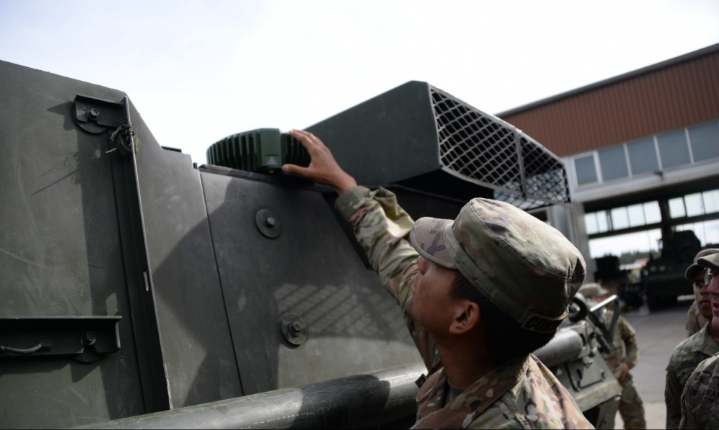 Why? James E. McPherson the 34th Under Secretary of the United States Army was very clear in a July interview. “[The multi-domain force] has to be expeditionary and responsive at scale, bringing the right capabilities in the right place at the right time,” McPherson told a virtual audience during the Armed Forces Communications and Electronics Association’s Army Signal Conference.

“What we build now must be survivable in that fight,” McPherson said. “It must be mobile, it must support, see on the move and … it must be tailorable.”

“MAPS GEN I continues to partner with 2nd Cavalry Regiment to provide mounted PNT to their Soldiers in support of their mission,” said Jim Spofford, the Assistant Product Manager for Mounted Positioning Navigation and Timing (PdM M PNT) who was in Germany for the GEN I install. “As a team, we are learning how soldiers interact with the PNT data and improvements that can make that interaction more efficient.”

“The U.S. Army Europe (USAREUR) equipping has highlighted the importance of a strong partnership between combatant commands, product managers, and cross functional teams. Without the coordination and buy in from USAREUR, APNT CFT, and PM PNT, accelerating this quick reaction capability to Army forces would not be possible.” said Spofford.

Jen Thermos, Deputy, PdM M PNT, echoed Spofford’s sentiment on working with many partners, saying “Maximum collaboration and communication is the foundation of the Mounted PNT team strategy. Going fast is about getting, sharing, and analyzing information quickly to make decisions that everyone understands.”

“This strategy has enabled our team to implement an aggressive schedule to focuses on learning fast, making timeline decisions, and vigorous execution,” said Thermos. “The Mounted PNT team with its partners learns early trough iterative testing, continuous platform and client integration planning, and vendor collaboration to ensure Mounted PNT products are the most capable available to the Army.”

“The Mounted PNT program and the APNT CFT are continuously evaluating all the PNT technologies available to enable assured PNT to Army forces anywhere in the world.” said Lt. Col. Alexander “Raz” Rasmussen. “A part of this effort is the recently established PNT Modernization product office. PNT Modernization’s mission is to evaluate and test PNT technologies available across industry, academia, and government labs. Based on applicability, mission need, and maturity, PNT technologies will be accelerated for integration into MAPS. We must continue to provide ‘fight tonight’ capability to Soldiers worldwide while accelerating technologies that maintain threat overmatch in the future.”

“In parallel to providing a Quick Reaction Capability through MAPS GEN I, the Mounted Team in partnership with the A-PNT Cross Functional Team (CFT) has accelerated the development of next generation PNT capability through an Other Transaction Authority (OTA) agreement.” said Rasmussen. “After an Operational Technology Demonstration led by ATEC and with participation from the 3rd Cavalry Regiment, MAPS Generation II (MAPS GEN II), was selected for production preparation as the Army’s program of record solution. The MAPS GEN II brings M-code [a more specialized bandwidth of RF signal] to the force and the ability to defeat the most challenging threats in a Multi-Domain environment.”

Spofford is currently working with maintenance crews on Fort Riley to install MAPS systems on Abrams tanks and Bradley fighting vehicles, with installations for Stryker’s and Paladins scheduled in the coming months. He stated that training lessons learned from previous fieldlings in Germany are being applied across the board.