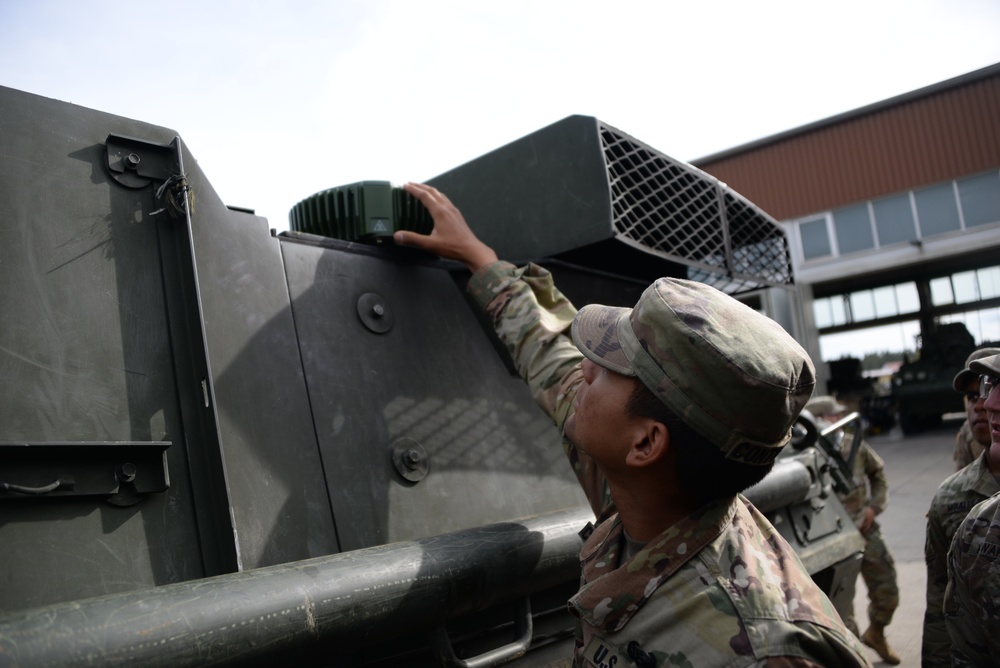 Photo By John Higgins | ROSE BARRACKS, VILSECK, Germany — A Solider with 2nd Squadron , 2nd Cavalry Regiment touches a newly installed component of the Mounted Assured PNT (Positioning, Navigation and Timing) System (MAPS) Generation 1, (MAPS GEN I), a powerful suite of new hardware and software that will ensure Soldiers have assured position and timing to navigate in a GPS degraded and denied environment. Members of Project Manager Positioning Navigation and Timing (PM PNT) landed in Germany in early September with a mission: outfitting Soldiers’ Stryker vehicles with the latest in Positioning, Navigation and Timing (PNT) equipment in cooperation with U.S. Army Europe, and 2nd Cavalry Regiment, the Assured Positioning Navigation and Timing Cross Functional Team (APNT CFT), TRADOC Capability Manager – Tactical Radios (TCM-TR) and the mechanics of the Rose Barracks motor pool. The team’s objective for the month of September was outfitting a large number of Stryker vehicles with the latest in improvements to augment and secure the main function of GPS equipment. U.S. Army photo/John Higgins

Uncertainty in military operations is never good. Uncertainty can hinder movement, planning and even morale.

(PM PNT) makes it their business to eliminate the uncertainty in navigation, and Product Manager Mounted Positioning Navigation and Timing (PM Mounted PNT) focuses on that mission with mechanized units and their vehicles.

Late 2021 marked a big milestone for their efforts when they equipped their 1000th vehicle with the Mounted Assured Positioning Navigation and Timing System or MAPS, Generation I. MAPS’ core functions include providing GPS capabilities in environments to reach a level of “overmatch,” with an opposing force, to bring that certainty to the classic Army phrase “shoot, move, communicate.”

There are two key capabilities that MAPS provides. The first is the Anti-Jam antenna and second is using alternative signals that can overcome signal degradation from weather and terrain.

The Product Manager to bring the team to this point was Lt. Col. Andrew Johnston taking over the mission that began in September 2019.

Johnston’s operational branch was field artillery, he worked at Picatinny Arsenal, next he was part of a “work with industry” program amongst other programs before coming to Aberdeen Proving Ground, making him ideal to head up a PNT focused team.

“The indirect fires community is a big user of PNT; so I was familiar with all that,” said Johnston. “How important this capability is and what it does for the warfighter was not lost on me.”

“I thought I was pretty PNT savvy before I got here and I’ve learned a whole lot more,” Johnston said.

“The seeds for where we’re going were planted a long time ago,” Johnston said. “We’re just fortunate to be harvesting that.”

The PM Mounted PNT team has trained more than 1,600 Soldiers during the equipping.

“It is not easy to field a capability across an ocean,” Johnston said. “It’s even harder during COVID. Everybody had to be ready and deal with the restrictions.”

“This really comes down to people, and the Mounted PNT team is really blessed to have a lot passionate people as they did a great job with leadership,” Johnston said. “And the product team under PNT Modernization were indispensable.”